Phantoms of a Plague, Part 1

A plane touches down at Monrovia’s Robertsfield airport. As passengers disembark, they’re directed to wash their hands at a plastic bucket of warm, sudsy water waiting on the tarmac. Among them is a team of three scientists—Dr. Jon Epstein and Emily Hagan of EcoHealth Alliance, and Dr. Maureen Miller. They’re in Liberia under the auspices of the Ebola Host Project to identify which wild or domestic animals are natural hosts for the deadly virus. As their jeep blasts down a packed dirt highway toward the Guinean border, they see traces of the recent pandemic everywhere. Signs by the roadside implore travelers to wash their hands and avoid intimate contact.

In many ways, the country hasn’t yet fully recovered from the civil wars of 1989-2003 that left some 150,000 people dead and an additional 850,000 displaced. It is telling that of all the team’s Liberian colleagues, only one stayed behind throughout the entire conflict. The concrete and rebar roadblocks which punctuate the journey are one legacy of that conflict, only recently appropriated by the public health department as Ebola screening, and hand-washing stations.

After hours watching the deep reds and greens of the West African countryside fly by, their jeep pulls up to the administrative offices of a bustling mine site. This is where they meet Jerry Garteh, the country coordinator. A native Liberian, he began his career as a biologist before an enthusiastic professor pointed him toward environmental conservation. In light of the recent epidemic, he now uses his conservation know-how to locate and test the different species (mostly non-human primates, rodents, and bats) that might carry Ebola virus. His goal is to test 18,000 individual animals by 2019. This is a whopping figure, requiring all ten of the field technicians he has hand-picked for the job. Although Liberia has a number of physicians testing people for Ebola, little attention or infrastructure has been invested in testing wild and domestic animals. The capacity to test bats, the most likely vector for the disease, is virtually non-existent. 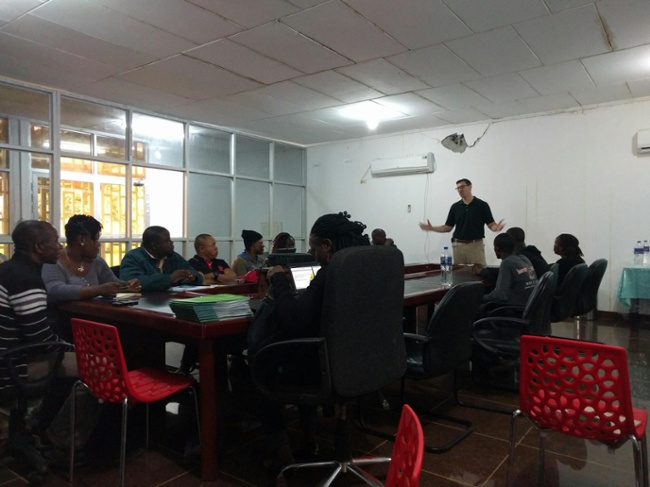 This newly formed team’s first opportunity arrived in the form of an ‘Ebola wire.’ A mining company interested in reopening an abandoned site close to their own operation contacted Jerry after discovering one mineshaft had since become home to a colony of some 3,000 bats. Knowing the disturbance of heavy equipment and miners could scatter the colony into the surrounding hills to disastrous effect, they wanted to make sure the bats were Ebola-free before extracting the iron-ore. 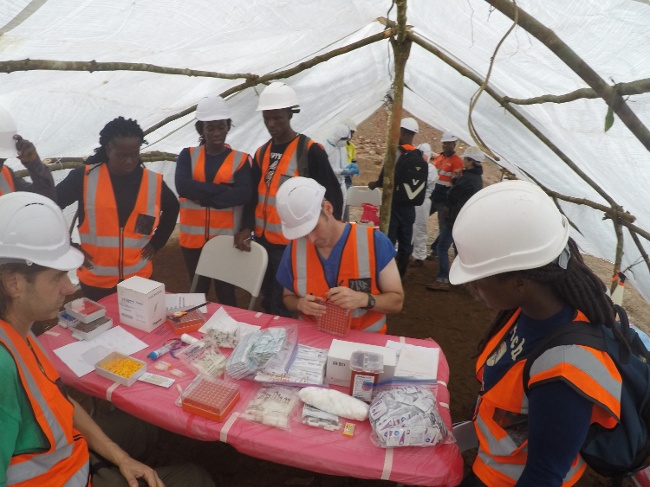 For three days, Jerry Garteh, Jon Epstein, and Jim Desmond (the country coordinator) go over the theory behind safe wildlife capture in a conference room at the mine’s offices. They run the assembled group of ten liberian biologists, ecologists, and social scientists through the movements and procedures of field testing. “We’re really building capacity from square one here,” says Jon Epstein, referring to the infrastructure needed to test bats for Ebola. “We’re lucky Jerry’s so good.” After three long days sitting around a conference table, everyone is itching to stretch their legs and start sampling.

Luckily the testing site is quite close. After a few hours, the field testing station—a bunker-like tent made of wooden beams and tarpaulin—is built. The team makes its way through the broad, heavy leaves of the surrounding vegetation to the mouth of the nearby mine shaft. Here they set up a harp-trap, a vertical contraption made from layered rows of clear fishing line. Unable to see or detect them by echolocation, the bats hit these strings and tumble down unharmed into a wide, white cloth bag. The mine opening drinks the last rays of evening light. Though an entire colony of bats is hidden in that darkness, nothing can be heard over the clack and snap of the trap being set.