One Health in Action

On October 23, 2014, a doctor checked into Bellevue Hospital in New York City with fever, nausea, pain, and fatigue. He’d spent the previous month in Guinea helping Doctors Without Borders and wanted to be safe. As it were, he tested positive for the Ebola virus later that day. It had happened; Ebola had reached the nation’s largest city.

Health officials urged caution, but many panicked. At pharmacies, surgical masks sold out immediately. The city’s frequently congested public transportation system looked like a ghost town, despite experts’ urging that it was unlikely the disease could be spread on subway poles or hand railings.

It had been a hectic month; less than two weeks earlier a nurse in Dallas tested positive for the hemorrhagic fever which she’d caught from a patient who’d recently flown from Liberia. Hers was the first case of Ebola ever contracted in the United States.

Fortunately, both the doctor and nurse survived, and neither transmitted the disease any further.

But this is, of course, not where the story ends. Nor where it starts. It is just an interlude, neither the story’s most dramatic nor its most tragic beat, though it is perhaps its most widely publicized. The story starts nearly one year earlier, in Guinea, when a two-year-old boy fell ill with a mysterious fever and died. Shortly after that, his sister, mother, and grandmother all succumbed to the same aggressive illness.

Though perhaps even that is not the beginning.

Ebola’s first known fatalities were in 1976 during unrelated outbreaks in what is now South Sudan and Zaire, known now as the Democratic Republic of the Congo. It was in the DRC that the virus was identified and named for a river the outbreak’s patient zero had visited. A leading theory is that the DRC outbreak’s index patient caught the virus from contact with the carcass of either an antelope or monkey, both of which are eaten in central and western Africa. 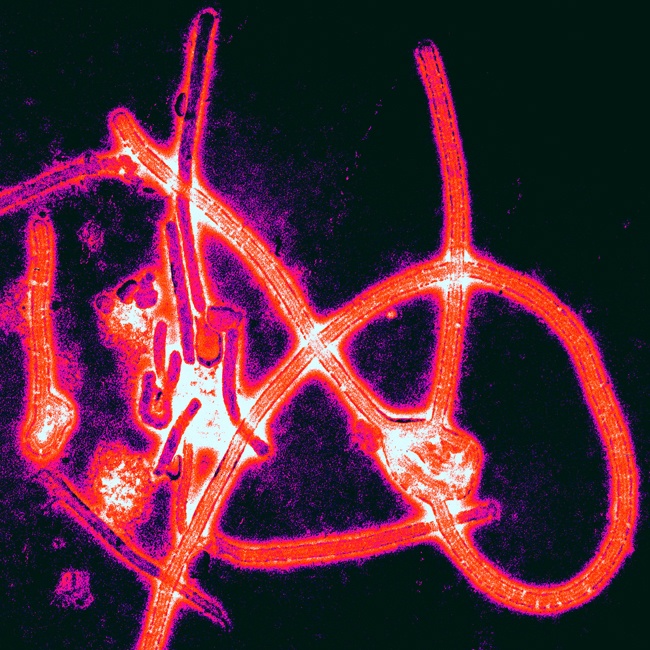 Even before that, the Ebola virus was probably killing for centuries or even millennia before we’d developed the technology to detect it.

There are several reasons why Ebola is so frightening to epidemiologists. One is that it acts quickly: from the onset of symptoms, a patient can be dead within six to 16 days. Another is its onset: a person can remain asymptomatic for nearly a month. While they’re not contagious during this time, the length between infection and diagnosis can make it difficult to track the virus’ origin. The biggest fear is that we still don’t really know how Ebola outbreaks begin.

In an outbreak–there have been at least 24 since the virus’ discovery–most contract Ebola via human-to-human transmission. But the index patient in each instance has to have gotten it from somewhere else. It’s widely believed bats are the host species for Ebola, and that it’s through direct contact with their bodily fluids, or with those of other animals who’ve contracted it from bats, that humans fall sick with Ebola. But even that hasn’t been 100 percent, beyond-a-shadow-of-a-doubt confirmed.

Bats are the known hosts of dozens of other diseases, like rabies, SARS, Nipah, and the Ebola cousin Marburg virus. While at first it may seem culling bat populations would be the easiest and most effective way of preventing future illness, that instinct would be a mistake.

And that’s where One Health comes in. 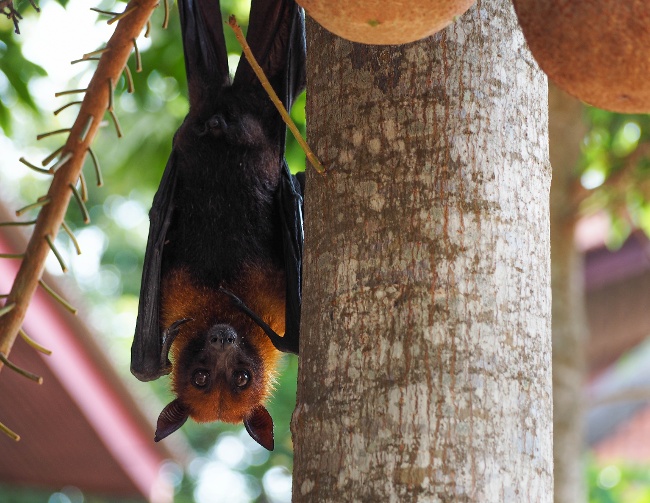 A bat hangs from a tree in Thailand (Photo: EcoHealth Alliance)

Bats are the primary pollinators and seed spreaders for half of the world’s forests. In addition, there are 300 species of fruit which depend on bats for pollination, including the southeast Asian favorite durian. Without bats, we could say goodbye to these foods as well as much of the world’s tropical vegetation. That would also mean certain extinction for any number of animal species which depend on these forests for food, shelter, or water. With a limited supply of timber, say goodbye to anything made of wood or dependent at any point in its production on wood. (That is, by the way, just about everything.)

To take the scenario even further, tropical forests absorb carbon dioxide from the atmosphere, preventing the planet’s temperatures from rising to uninhabitable levels. As the trees die, we would see more and more frequent flooding and mudslides; essentially, every rainstorm would have the potential to be a mass fatality incident. This would be a major problem for people in both urban and rural areas, except for the fact that, with the new global temperatures, many of the planet’s most populous cities would already be underwater from rising sea levels. 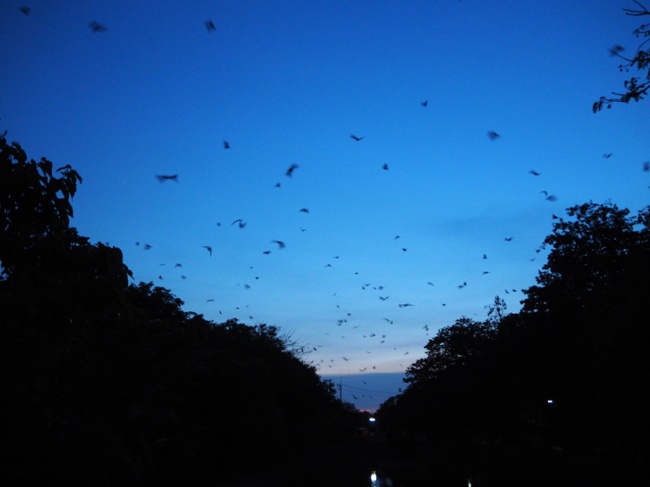 Bat colonies are most active at night (Photo: EcoHealth Alliance)

Additionally, bat culling might even put human populations at greater risk of disease. As EcoHealth Alliance’s Kevin Olival writes in his op-ed To Cull, or Not to Cull, Bat Is the Question, “First, the act of killing wildlife itself puts people in close contact with animals and increases the likelihood of an individual being exposed to a disease. … Second, culling can result in increased disease spread by forcing populations of bats to migrate and establish in new areas. For example, the Nipah virus reservoir, the large flying fox, migrates far more widely in peninsular Malaysia than in other countries largely due to hunting pressure and habitat modification.”

Bats also play a major role in controlling insect populations and curbing the spread of diseases they carry, like malaria, dengue, West Nile, and chikungunya.

To sum it up, Dr. Jon Epstein, EcoHealth Alliance’s Vice President for Science and Outreach, says: “Essentially, limiting contact between bats and livestock–or bats and people–can really help to insulate us–and help to protect us–from some of those pathogens [bats carry]. Without harming bat populations and without affecting the good that they do.”