The Gentle Giants of Borneo

From its headwaters in the western mountains to its outlet in the eastern Sulu Sea, the Kinabatangan River snakes for more than 300 miles across the Malaysian state of Sabah on the island of Borneo. Along its winding journey, the river’s muddy waters cut through time itself, past the roots of trees more than 1,000 years old, through a rainforest which began to take shape more than 100 million years ago. The lush green of the region is boundless, thick vegetation scored by a symphony of insects and tropical birds. In November the rains begin and don’t let up until February; the deluge forms a curtain of sound. Heat in the rainforest is something tangible, the air thick with humidity and the smells of flora and fauna. It is this secret world, along the rivers of the Kinabatangan, that the endangered Borneo pygmy elephant makes its home. 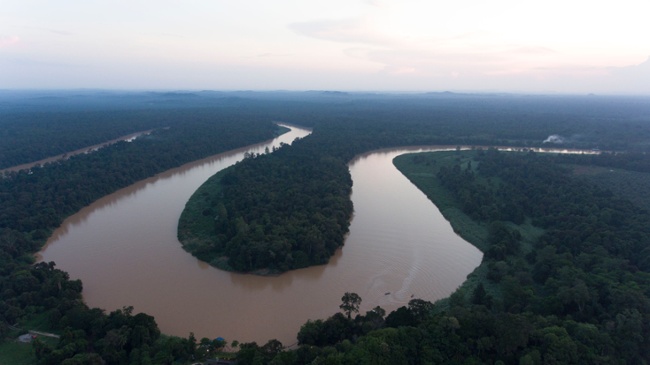 Borneo is a massive island separated from mainland Asia by the South China Sea to which three nations–Malaysia, Indonesia, and Brunei–lay claim. The origin of the elephants on this island is subject to debate. It was once believed that Borneo’s elephants descended from a pair given to the Sultan of Sulu–who ruled over present day Sabah–in the 18th century by the East India Company. However scientific evidence suggests that elephants simply walked into Borneo when it was connected to continental Asia during the last ice age. They’ve been evolving independently of their cousins for the past 300,000 years.

Pygmy elephants are distinguishable by their straight tusks, long tails, and relatively small ears. Despite the implications of their name, pygmy elephants stand between seven and 10 feet tall, though they are the smallest elephant species on the planet. Despite their bulky stature, they’re agile creatures capable of running up to 26 miles per hour, just short of the fastest human speed ever recorded. Bornean elephants are social, living in herds, and known to be less aggressive than their mainland Asian and African cousins. But Bornean elephants are most easily distinguished by geography; like many species on the island, it is the only place they can be found in the wild. 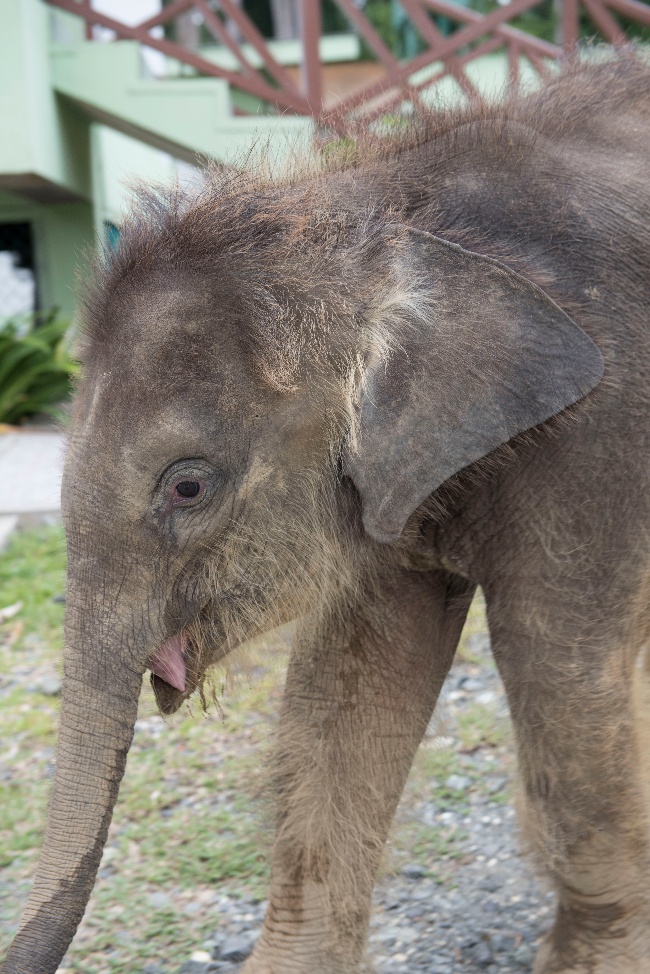 But the face of their homeland is rapidly changing.

It’s estimated that palm oil is in as much as 50 percent of products on supermarket shelves, anything from ice cream to lipstick to detergent. It’s an incredibly useful product: cheap, free of trans fats, flavorless, semisolid at room temperature, and resistant to oxidation giving it a long shelf life. Worldwide, Malaysia is the second-largest exporter of palm oil behind only Indonesia, making Borneo the epicenter of the world’s palm oil production. Palm oil is controversial in part because of how it’s produced; large swaths of rainforest are felled to make way for the palm trees, often with little to no consideration for the effect it has on endemic species and verdure. Palm oil plantations occupy up to 15 percent of the land in Malaysia, most of that co-opted from former rainforests. In Sabah alone, 40 percent of the forested land was converted for human use between 1973 and 2010.

RELATED: The Price of Palm Oil

It isn't just loss of land that threatens this endangered species. Pygmy elephants are migratory, traveling the same route for generations, led by an elder matriarch. When palm oil plantations sprout up along these routes, elephants must pass through them. Because of this, many local farmers have branded them pests and several were even poisoned in 2013 in an incident Sabah's Environmental Minister called "a sad day for conservation and Sabah." 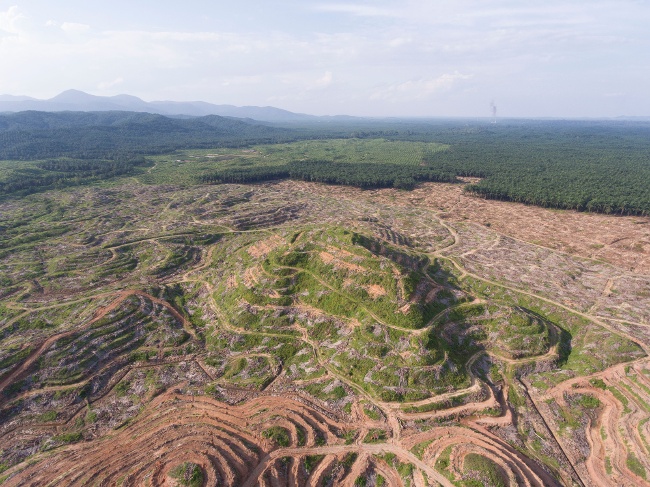 The simple fact is: the palm oil industry in Malaysia isn’t going anywhere. Palm oil production is responsible for about six percent of the country’s annual GDP, comparable to the contribution the internet sector makes to that of the U.S. To halt it entirely would be devastating to the country’s economy and to the world’s no less.

But even if we can’t halt it, we can still curb its devastating impact on the environment. And that’s exactly what EcoHealth Alliance is working to do.

“What we're trying to do is work with international corporations as well as local plantation owners to help them decide... if they're going to convert land, there may be a benefit to being selective about which land they're converting,” Dr. Jonathan Epstein, EcoHealth Alliance’s Vice President for Science and Outreach, says. “An economic benefit for them and a health benefit for them and society. And that has to do with the potential risk of an outbreak occurring because of the disruption of that particular ecosystem, so we've been working for the past few years to develop models that can assess the cost–the economics–of deforestation.”

To aid in these efforts, we have been working to develop models that can assess the cost of deforestation, and to use these models as tools to help mobilize communities and influence palm growers, policy makers, and stakeholders. This would, in turn, help prevent the risk of a disease outbreak that could result from the disruption of the ecosystem of which the pygmy elephants are an integral part. 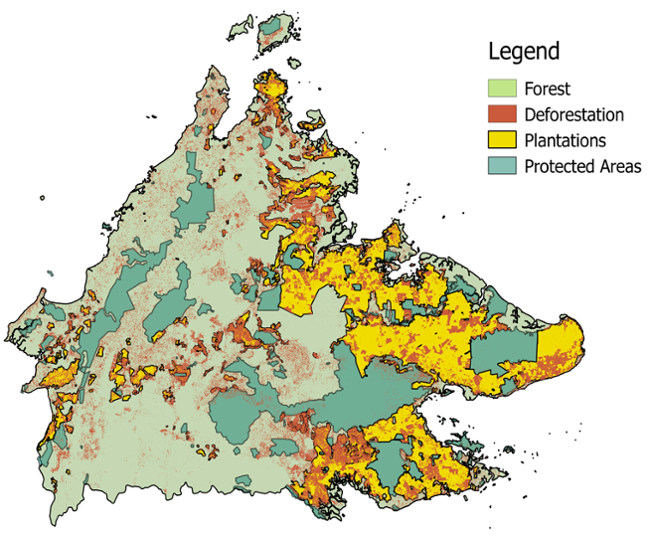 This graphic shows how land is used in Sabah as of 2010 (Graphic: EcoHealth Alliance)

There are only an estimated 1,500 pygmy elephants left in the wild; they are all on Borneo. Pygmy elephants are not the only endangered species clinging to life on the island. There is also the Bornean orangutan; their numbers have declined by more than 50 percent over the last 60 years. The Sumatran rhino–a hairy subspecies closely related to the extinct woolly rhinos–used to roam lands as far as India and Thailand, but now they are confined to Borneo and the Indonesian island of Sumatra. There are less than 100 left. 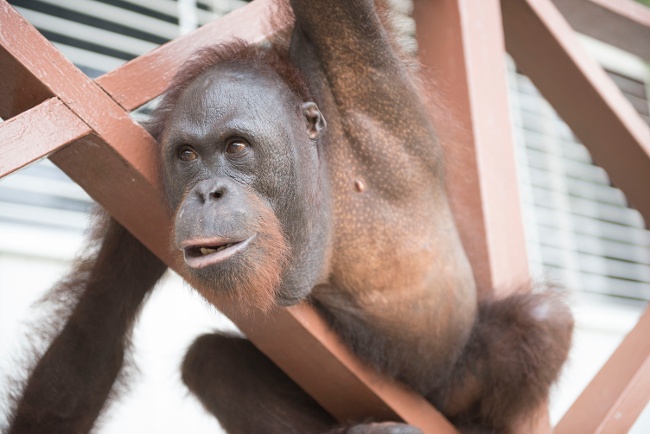 Preserving their habitat is one way to ensure these unique species have a future, of course, but it can also play a part in preventing future human exposure to fierce and deadly pathogens. That’s something we all can, and should, get behind.