At the time of the onset of the 1918 Influenza Pandemic, medicine had quite a long way to go. It was still a common enough belief that the flu was spread through miasma, or poisonous vapors.

The chaos of World War I and, arguably, even more so, the misinformation around the flu bear much of the fault for the pandemic’s devastating spread. In fact, even the pandemic’s vernacular name, the Spanish flu, is based on mistaken assumption. As the disease spread throughout the trenches of the European battlefield, belligerent nations’ governments went to great lengths to conceal its severity, so as not to lower morale. In neutral Spain, however, the press was free to report as it pleased and did so especially when the nation’s King Alfonso XII became gravely ill, leading to the assumption that the flu had originated in Spain.

Being responsible for one of the worst infectious disease outbreaks in human history, however, the particular flu strain behind the pandemic has been studied extensively in the years since and those studies have produced valuable information which remains very much relevant to this day.

"Essentially People Are Drowned by Themselves"

The numbers speak for themselves, but the 1918 influenza was a particularly nasty one. In stark contrast with most seasonal flu outbreaks, this one was more deadly in the young and healthy than in the elderly or sick.

For a long time, this baffled the scientific community, but a study published by Nature in 2007 sheds some light on this unusual detail. It’s not just that the virus lodged in both upper and lower respiratory systems which made it so deadly. The study determined that this particular strain of H1N1 causes an overreaction of the immune system. The bodies of the infected create an excess of cytokines: molecules in the blood that activate the immune system. This cytokine surge leads to an overaccumulation of fluid in the lungs.

Or, as one of the study’s authors put it: "Essentially people are drowned by themselves."

People with a more robust immune system were, ironically, more at risk of death. A flu virus that thrives on healthy young adults circulating through war barracks and military hospitals is a recipe for disaster. 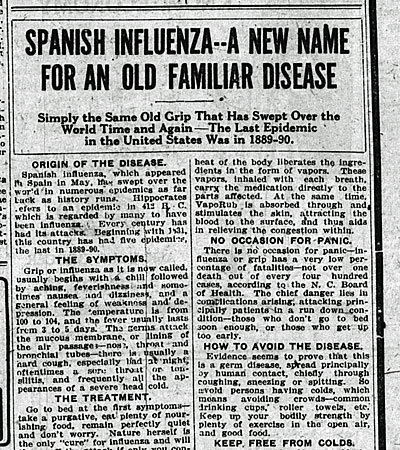 While the Spanish press was covering every detail of the flu outbreak in their country, press outlets in most other European countries and the United States were either forbidden from doing so or being directly lied to.

Under the auspices of maintaining wartime morale, President Woodrow Wilson signed the Sedition Act in 1918. Under threat of 20 years’ imprisonment, the law made it illegal to "utter, print, write, or publish any disloyal, profane, scurrilous, or abusive language about the form of government of the United States."

It was an era in which the government felt absolutely comfortable lying to its citizens.

"Truth and falsehood are arbitrary terms," Arthur Bullard, a former student of President Wilson’s wrote at the time. "The force of an idea lies in its inspirational value. It matters very little whether it is true or false."

And so then it is unsurprising that, as Americans were dying by the thousands, public health officials continually lied about the scope and severity of what was going on. The media fell right in line. An October 15, 1918 headline in the Philadelphia Inquirer read "Scientific Nursing Halting Epidemic." In that week alone, 4,597 people in Philadelphia died of flu-related illnesses. On September 20, the Arkansas Gazette wrote: "Spanish influenza is plain la grippe – same old fever and chills." The next month, Arkansas confirmed it had 1,800 cases and issued a statewide quarantine. (La grippe is French for "influenza" and the two words were commonly used interchangeably by Americans at the time.)

Lack of access to information is almost certainly responsible for prolonging the pandemic. Now more than ever, that is not the case. The tools EcoHealth Alliance creates are often accessible to everyone online. Tools like FLIRT which uses flight information to track how quickly, and exactly where, pathogens could travel from their initial point of infection. This has economic implications: It costs the global economy millions of dollars to respond to a disease outbreak once it starts. In the case of the SARS pandemic of 2002-2003–the first pandemic of the 21st century–that price tag was between $30 and $50 billion.

The World Health Organization maintains a constantly updated list of ongoing outbreaks worldwide. It is accessible to almost anyone.

This is not scare tactics. There’s a boom-and-bust mentality when it comes to outbreaks. Major ones–most recently Zika and Ebola–happen and the second they end, they leave the collective consciousness.

But disease outbreaks are a reality of everyday life, and one we need to take seriously as a target for prevention. With your help, our programs aim to identify new outbreaks before they spread and begin our pathway to the end of the Pandemic Era.

Every day at EcoHealth Alliance, we are working on the ground to stop these disease threats before they become deadly and expensive outbreaks. Not only does it save money but it saves lives. Unfortunately, it can also sometimes be complicated to explain the work that we’re doing, which is why we’re so excited to share “Outbreak: Epidemics in a Connected World” with you. Open now at the Smithsonian’s National Museum of Natural History, Outbreak explains the work that epidemiologists do. It explains how disease outbreaks begin, how to prevent them, and our One Health mindset which allows us to protect people, animals, and the planet at the same time.