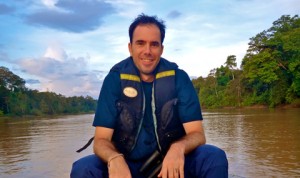 "Globally policy makers rarely listen to pleas to conserve habitat to protect flora and fauna species but they will pay attention if it prevents disease emergence and saves them money.”

As Malaysian Project Coordinator at EcoHealth Alliance, Tom Hughes coordinates all of our sampling, testing, capacity building and training efforts in Malaysia. Tom’s responsibilities include setting up and running the Study of Zoonotic Infections among Persons Exposed to Wild Animals, a collaborative research project with the Malaysian Government, as well as being the PREDICT country coordinator for the USAID Emerging Pandemic Threats program and Deputy Chief of Party for the USAID Infectious Disease Emergence and Economics of Altered landscapes (IDEEAL) Project.

Tom began working with EcoHealth Alliance in June 2005 on the Nipah virus research project in Malaysia. In 2007, he took on the new role of coordinating the Study of Zoonotic Infections among Persons Exposed to Wild Animals in Malaysia, to determine if close contact with wild animals results in the transfer of zoonotic diseases. In 2010, Tom became the PREDICT Malaysia country coordinator for USAID’s Emerging Pandemic Threats program. The aim of this research is to create an early warning system for potential zoonotic disease spillover into livestock and humans. Tom is working closely with partners from the Ministry of Health, the Department of Wildlife and National Parks, the Department of Veterinary Services, Sabah Wildlife Department and local universities to develop personnel and laboratory capacity and establish sustainable disease surveillance systems.

Since 2012 Tom has established the Deep Forest Project in Sabah, a study of the effects of land use change on viral diversity, and set up the Wildlife Health Unit and the Wildlife Health, Genetic and Forensic Laboratory, with Sabah Wildlife Department and Danau Girang Field Centre. In October 2013 Tom was appointed the Deputy Chief of Party for the USAID IDEEAL project that investigates how human alteration of landscapes and ecosystem degradation contribute to disease emergence. Capturing the economic impact of public health risks introduced via land use change presents an opportunity to promote sustainable land management policies to mitigate these threats. Diseases that emerge when we alter the environment and increase contact with wildlife can cost hundreds of millions of dollars and are a hidden cost of development. Simultaneously, deforestation and forest degradation account for between 14 to 17 percent of all greenhouse gas emissions. A key strategy in reducing the dual threats from diseases of pandemic potential and climate change is a robust evidence base that accurately captures the value of ecosystems.

“Globally policy makers rarely listen to pleas to conserve habitat to protect flora and fauna species but they will pay attention if it prevents disease emergence and saves them money.” – Tom Hughes

Tom received his Bachelor of Science in Development Studies and Natural Resources from the University of East Anglia and has a Post Graduate Diploma in Public Health from the London School of Hygiene and Tropical Medicine. Tom has also worked on EcoHealth Alliance projects in Bangladesh, Cameroon, Thailand and the Philippines. A member of the Henipavirus Ecology Research Group, his research interests include the ecology of zoonotic viruses such as Nipah virus or Ebola; zoonotic disease emergence at the human-animal interface; and species and habitat conservation. His work has been featured on The National Geographic Channel, BBC Newshour, and in several publications including The Independent, The Boston Globe, Newsweek, The Daily Telegraph, The American Journal of Tropical Medicine and Hygiene, Emerging Infectious Diseases Journal and The Journal of Applied Ecology.